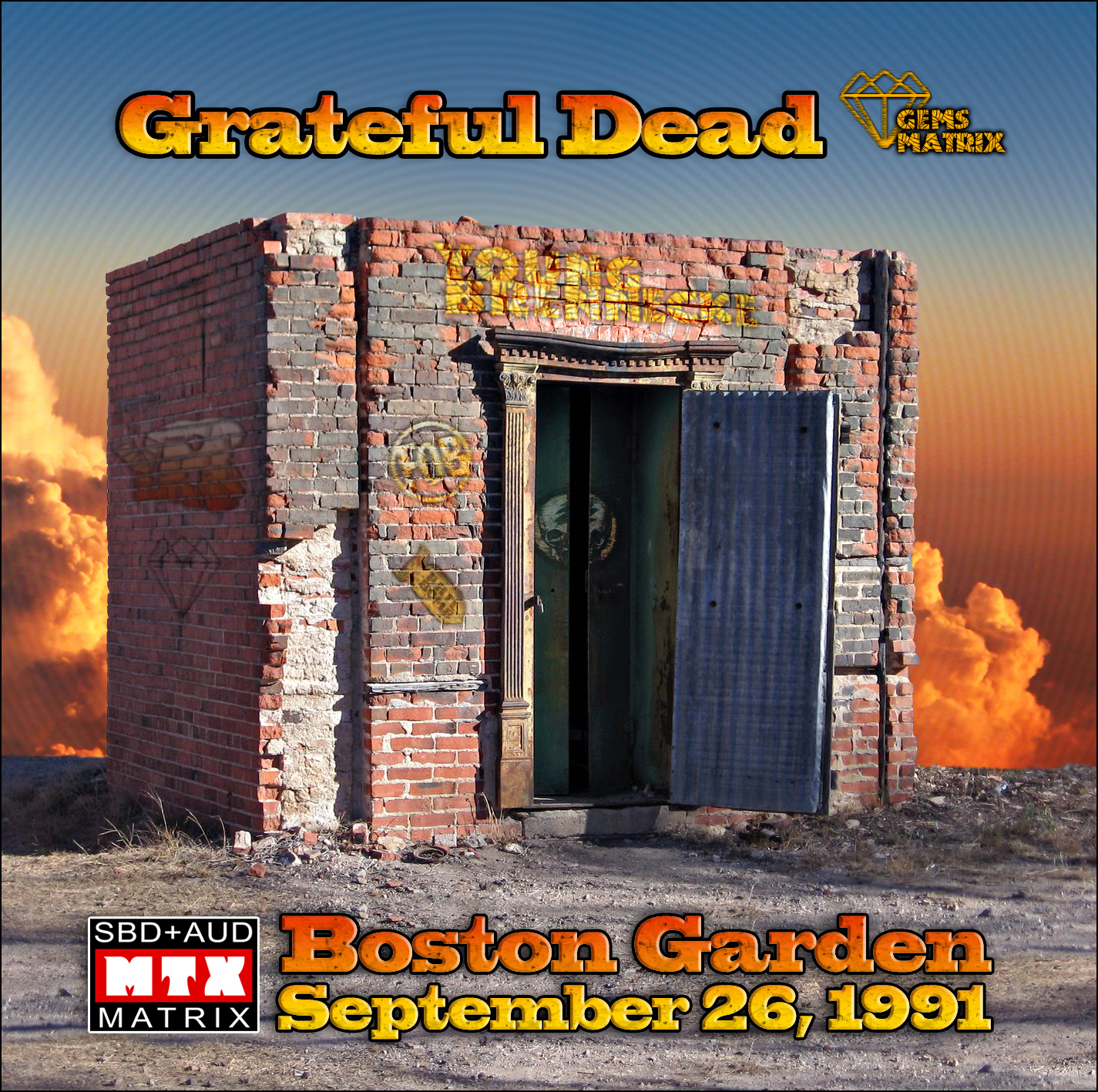 Dark Star-> Saint Of Circumstance-> Eyes Of The World-> Drums-> Jam-> The Other One-> Dark Star-> Attics Of My Life-> Good Lovin', E:Brokedown Palace-> E: We Bid You Good Night

Matrix Notes: This Matrix Recording is a mix of the soundboard source at 60 % and the audience source at 40%.

Mix down was -2 dB on the SBD and -7 dB on AUD. The audience source used was the master 16bit/48kHz file that supplied shnid 101443. The SBD source was Sample Rate Converted for the synch work as the original transfers were no longer available. All mixing after a bit rate conversion to 24bit/48kHz by Amdig (dan@am-dig.com)

- Set One "Crowd & Tuning" First 2:19 is AUD source only. Completed the transition with crossfade to the SBD.

- "Cumberland Blues" Missing 1:34 of crowd (tape flip) after song. Patched with AUD and crossfaded the transitions to the SBD.

- Set Two "Crowd & Tuning" First 1:34 is AUD source only. Completed the transition with crossfade to the SBD.

- "St. Of Circumstance" A subsecond dropout .917 was missing from SBD. Patched with AUD and crossfaded the transitions to the SBD.

- "Space" Missing 26.156 from SBD (tape flip). Patched with AUD and crossfaded the transitions to the SBD.

- "Good Lovin'" from SBD Missing 44.451 of crowd after song. Patched with AUD and crossfaded the transitions to the SBD.

Editing and Mastering on FOB and Final Mastering: Jamie Waddell (shnflac@gmail.com) on the GEMS Edit Station.


Amazing energy felt and heard by all on stage that night...

Thanks to all involved!!
Reviewer: myhungryhippo - favoritefavoritefavoritefavoritefavorite - December 5, 2010
Subject: Mexicali Blues-> Cumberland Blues
once seen this one once. and here it is
Reviewer: droppeddminer - favoritefavoritefavoritefavoritefavorite - February 7, 2010
Subject: Thanks!!
Glad I was there... and glad it's available here for me to stream tonite - cuz I'm skippin "the boys" in Orlando, who should be just about finishing up right now... Count me among those who'd much rather hear what new sounds and new ideas a different kinda guitar player might inspire in Phil & Bob than whatever comes outta tryin' to reclaim whatever's left of the old with a "plays (and sings) like Jerry" guy - still pretty good, I imagine, no offense to anybody who chooses to go to these shows, part of me really wanted to, no offense to Kadlicek, who does what he does real well, but to Phil & Bob, well, I am kinda disappointed, it just feels counterfeit to me...
Reviewer: barongsong - favoritefavoritefavoritefavoritefavorite - October 23, 2009
Subject: The best yet
This is the best transfer of this show yet. As close as it comes to capturing the essence as it was performed on this very special night. I bow my head and give thanks to all involved in this one. We need more of this Quality. Do yourself a favor and get this in a lossless format if possible and crank it to 11. It's that crisp and clean with no caffeine. 5 star mix!!
Reviewer: Sedula - - October 2, 2009
Subject: Hornsby on Brokedown
Sbrew said: "Though he's a wonderful player in general, Horsnby leaves me scratching my head some times. He absolutely butchers what could have been a beautiful BROKEDOWN PALACE, with his aggressive, loud and staccato accordian playing."

Well you are entitled to your opinion, but being a professional jazz musician and listening to this (as well as 200+ deadshows) there is nothing he is doing/playing that is wrong. Usually when you butcher a tune you play it poorly or wrong, which he did not do. I think he sounds great on Brokedown, but you obviously don't. But he certainly did not butcher the tune. Hornsby is light years ahead of all of the dead players, except maybe Phil. Hornsby can hang with the best of jazz musicians, the rest of the dead couldn't (except maybe Phil again).
Reviewer: sbrew - favoritefavoritefavoritefavorite - September 28, 2009
Subject: vg show for most part
Vg show overall. Though he's a wonderful player in general, Horsnby leaves me scratching my head some times. He absolutely butchers what could have been a beautiful BROKEDOWN PALACE, with his aggressive, loud and staccato accordian playing. Some times he just sticks out too much when he could do more service to the group by blending (or, in this case, not choosing a mid-heavy inappropriate instrument).

Uploaded by Matthew Vernon on September 27, 2009